Well, as predicted, I left it too late to complete my new dress. By Wednesday, the Birthday Dress was coming together much better than I'd expected and I didn't want to ruin it by rushing. I knew wasn't going to have enough time to finish it to my high standards so I decided to put it aside.
Here's where I got up to... 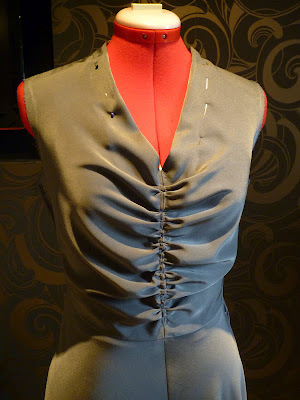 I'm really pleased with the bodice gathering, I managed to do it in one go with no unpicking! Surprisingly, it really does pay do make a muslin﻿ first. I took nearly two inches out of the length of the skirt but it's still too long and I'll need to take in the bodice a smidgen for a more flattering fit. The plan is to wear it next weekend so it will be finished in the next few days. Hopefully...
Now, back to my birthday celebrations! 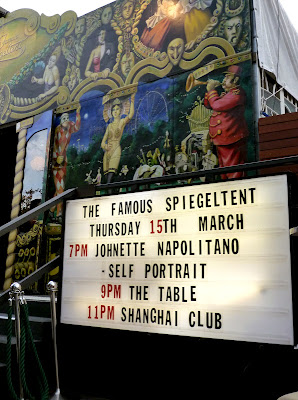 Things kicked off on Thursday evening with a show at The Famous Spiegeltent. I've been a Johnette Napolitano fan for many years and it was great to see her perform live. I last saw her back in the early 1990s when Concrete Blonde toured Melbourne, and while it may have been over 20 years (wow!), it was well worth the wait. Johnette may now be in her 60s but boy can that woman still sing!
Friday morning began with a home cooked breakfast of crepes and nutella (choc-hazelnut spread), followed by a busy afternoon preparing for our garage sale to be held at 9am the next day. There was a lot to do and before I knew it, it was time to head off for dinner.
Eastern Beach on Coiro Bay, Geelong has long been one of my favourite places to visit and I've always wanted to dine at The Promenade Restaurant. The restaurant is located on the upper level of  the Beach House - the former kiosk of the Art Deco bathing pavilion.
The swimming and recreation area of Eastern Beach were built in the 1930s and featured a shark-proof enclosure, a children's pool, kiosk and dressing room pavilion. The area began a slow decline from the 1960s and later decades of neglect saw the area fall into disrepair. In 1993, the Geelong council announced plans to restore the area to its former glory.
The Promenade restaurant was very intimate and we were given a table over-looking the swimming enclosures and the bay. Sadly, we missed the sunset but it was quite relaxing watching the boats come in to dock. The food was excellent, as was the service, and we left feeling extremely well fed. 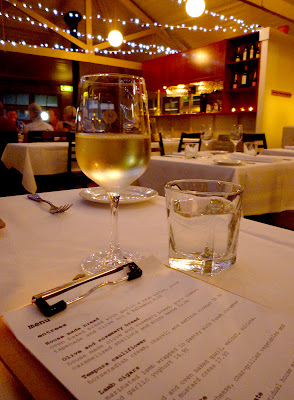 As for my outfit, I had to go with Plan B - the Last Dance Dress which was made under similar circumstances if I recall... 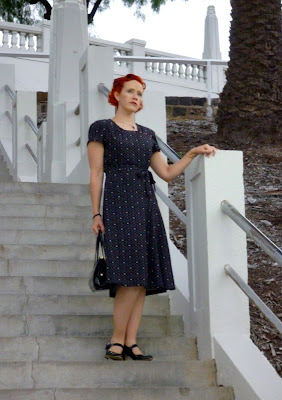 While it was a busy few days and I didn't finish my dress, I still had a lovely birthday.
-Tamara﻿
﻿
Posted by Tamara at 00:59

Email ThisBlogThis!Share to TwitterShare to FacebookShare to Pinterest
Labels: Art Deco Delights, Out + About, Sewing projects