Earlier this year, I recieved a lovely email from Melbourne-based visual artist Louise Saxton. She had discovered my blog through my 'Habadashery Heaven' post and thought I might be interested in her upcoming exhibition at Heide Museum of Modern Art. 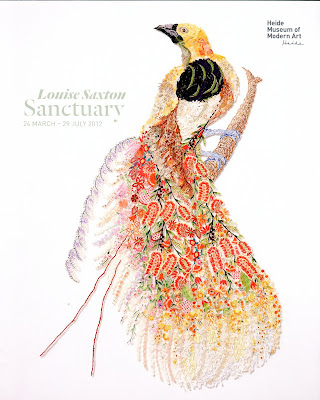 Sanctuary  uses reclaimed needle-work to reinterpret historical bird and insect paintings and is the result of two years of solid work. Each piece is painstakingly constructed by pinning the deconstructed embroidery pieces to nylon tulle to create texture and fill in the detail. Oh, and what detail!! Layer upon layer of foliage and flowers blended together, so much detail I could barely stop myself from touching. Not a good idea in a museum, plus the guard was watching me like a hawk.


After seeing the exhibition, I was curious about the construction process and the lovely Louise was only too happy to answer my questions. So, if you can't get to the show in person, I hope my mini interview sheds some light on how these beautiful creatures are created.

On average, how long does it take to construct a piece?
For example: Maria's Saturn (Caterpillar) vs the King Parrot?
Queen Billie, the King parrot, was the first of the birds in this collection and I worked on her over a 5 month period.  Maria’s Saturn, the caterpillar, only took 6 days but by the time I came to make it, a whole year later, I was working much more intensely on the pieces. It is also a much smaller piece.
Another good comparison is between the Flaming Flamingo, which took 21 solid days over 6 weeks while Major Tom, the cockatoo, took eight days over 2 weeks.

When sourcing materials, do you set out with a particular image or colour in mind? Or, do you just 'go by feel' and pick up pieces which attract your attention?

When I first began collecting needlework for deconstruction 5 years ago – mostly hand-made needlework, or machine-made by a person sitting at a machine – it was like a treasure hunt each time and I would buy everything I could afford.  I then cut and colour code it back in the studio.

I have gone hunting at various times for specific colours – and asked friends and family to keep an eye out for me. For example, when I decided to reinterpret Elizabeth Gould’s Major Mitchell’s cockatoo I needed to go out specifically looking for the variety of pinks to create the right palette.

The majority of your pieces appear to be made up purely of foliage & flowers, although I did spy a small bridge here and there. Is this intentional?
In my previous body of work which was the result of a residency in a Malaysian garden estate in 2006 and toured back to Malaysia and Singapore in 2008, I included all kinds of embroidered and lace motifs – animals, people, houses, boats etc., as the works were more 2 dimensional and mostly monochrome and the reference to other cultures was important, particularly Asian decorative arts.

For Sanctuary, I wanted the important relationship between the garden/forest and the bird/insect to be a strong element and for the motifs to blend as feathers and scale more.  Also, throughout history floral imagery has made up a large majority of needle-worked motifs so they are more common.
If you look closely at the work and there are a number of ‘hidden’ motifs, such as the bridges from the Willow Pattern, but also Chinese Cloud motifs and I deliberately chose a gold ecclesiastical crown for the feathers above the beak of one King-fisher. There is also a pink flamingo (which my husband found for me) hidden in the neck of my Flaming Flamingo! I like this element of playfulness within the work.

NOTE: All images appear with the kind permission of Louise Saxton.
Thanks again, Louise!!
Posted by Tamara at 16:30

Email ThisBlogThis!Share to TwitterShare to FacebookShare to Pinterest
Labels: Art, Out + About