A Touch of Grace

I had intended to post this piece yesterday but our internet decided to crap out, right at the last minute. I was nearly finished too. So, if it's all the same to you guys, let's just pretend it's Tuesday. OK?

Yesterday, I took a trip to Bendigo to see the much publicised "Grace Kelly: Style Icon" exhibition, showing at the Bendigo Art Gallery.

Grace Kelly: Style Icon is arranged in to three sections - The Actress, The Bride, and The Princess. My favourite section, ‘The Actress’, looks at Kelly’s acting career and her film costumes. Three costumes designed by MGM’s designer, Helen Rose, for her role in High Society (1956) are on display, including a Grecian-style bathing robe and an exquisite embroidered chiffon evening gown. 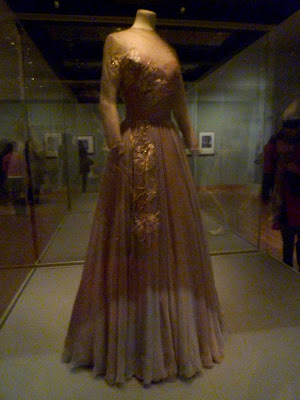 The embroidered gown is owned by a private collector and is on loan to the gallery as part of the exhibition. It is one of Kelly's most well-known gowns and, along with other Helen Rose designs from High Society, was a gift from MGM for Kelly’s wedding trousseau.

Edith Head designed this stunning ice-blue satin gown, and matching coat, for Grace Kelly to wear to the premiere of The Country Girl (1954), and Grace chose to wear the same ensemble to the Oscars when she was nominated for 'Best Actress' for the film. She was then photographed in the same gown a week later for the cover of Life magazine. Don't you just love that she wasn't too precious to be photographed in the same gown more than once? 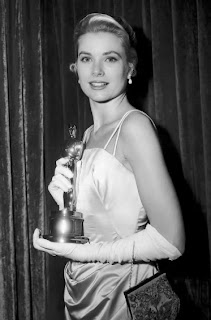 Although the bodice of this dress is fairly plain, it has the most beautiful, soft draping at the front waist; it's such a shame there wasn't a mirror set up in the exhibition display so you could see it a bit better. The other part of this dress you rarely see is the train. Thankfully, it is displayed in all its glory! Isn't it magnificent?! 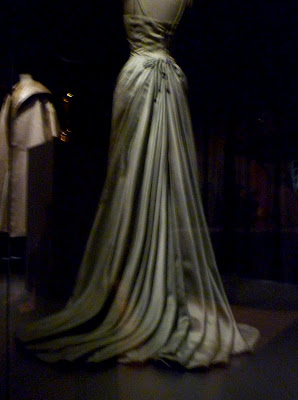 My most favourite dress from 'The Actress' section of the exhibition would have to be the black chiffon cocktail dress worn by Grace in Alfred Hitchcock's 'Rear Window'. Sadly, it was way too dark to even try sneaking a pic and none of the detail has shown up in any of the images I've been able to find. 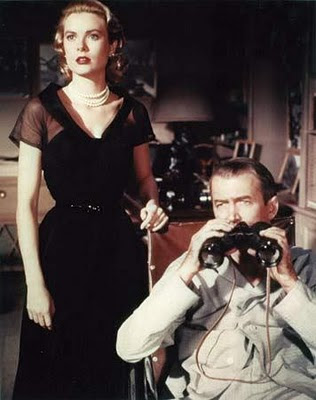 The stunningly simple rolled collar joins at the centre bust, winds under the bust line and continues out to the side seam. The collar fabric then appears to be run back across the bodice, creating a flattering V and drawing attention to the softly pleated, diamond-shaped panel in the front bodice. And then there's the skirt, oh the skirt!! It is made up of the finest knife-pleats you will ever see and, believe it or not, the hem is unfinished!

The sketch below gives you a better idea of the bodice detail, but this dress really does have to be seen in the fabric to be truly appreciated.
As for the rest of the exhibition; 'The Bride' outfits are beautifully tailored but were a tad boring for my taste; and 'The Princess' section features some crazy, colourful clothing from the 60s and 70s - think beaded kaftans - and a selection of hats, gloves, shoes and sunglasses.