The Devil's in the Detail

As I mentioned in my last post, it was far from smooth sailing with the construction of my wedding dress.

Regardless of whether I'm using a vintage or modern pattern, I always need to take an inch out of the bodice length. Ordinarily, the 'shorten/lengthen' line is marked on the tissue, but due to the Empire style bust line there's no allowance for it. To remedy the problem, I took an inch from the top of the skirt to bring the curve of the side seam up to my hip line, where it should be.


With this adjustment made, I set about making a muslin to check the fit. I'd purchased some crazy cheap silk satin from Thailand for the job and boy, could you tell it was cheap. You could hear the needle sawing through the fabric and it felt like I was sewing two pieces of paper together! Ugh! 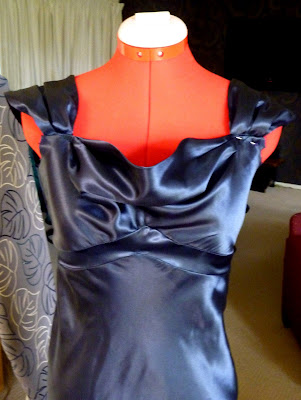 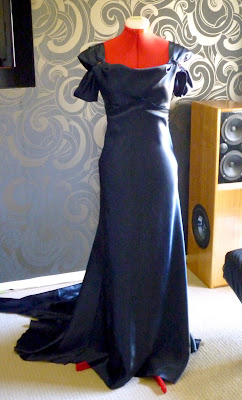 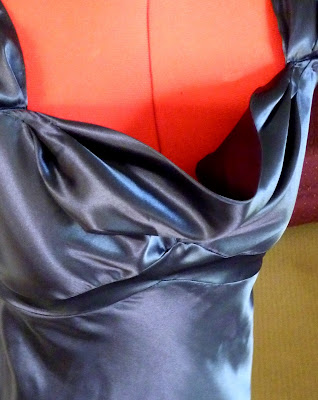 As you can see, the waistline is in the right place but the cowl is outta control! If I was going to wear this version, I'd be flashing my boobs all day; not to mention the amount of food that would find its way in there. I had no idea where to start in order to fix the excess fabric in the cowl and was so peeved with it, I threw the muslin on the ground and stomped all over it in disgust.
Several days later, after I'd had a chance to calm down, I took a second look. From what I could tell, I would need to remove at least an inch and a half from the cowl piece itself. With limited pattern making skills at my disposal, I decided to wing it and take out an up-side down triangular piece, starting at the mid-point of the bust. I had to make another two versions of the bodice from an old sheet before the cowl had just the right amount of fall. I didn't take any photos of the progress but here's the final result... 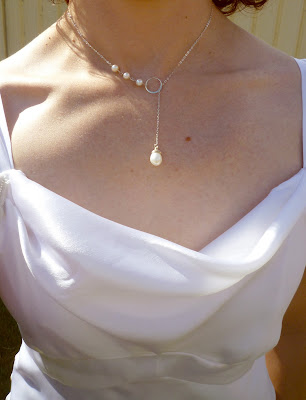 I hadn't really planned on adding any extra embellishments to the dress, other than the pearl strands, but when I came across a trim made up of beaded fans with tulle in Tessutti, I knew it wouldn't be complete without them. After carefully separating each fan, then reinforcing the edges so they wouldn't fall apart, they were sewn on by hand using invisible thread. What a pain in the butt that stuff is to use. 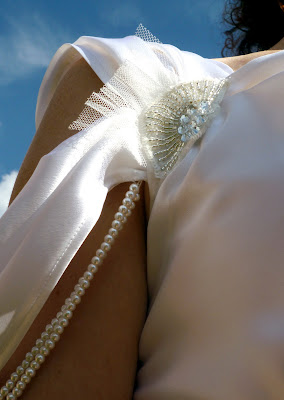 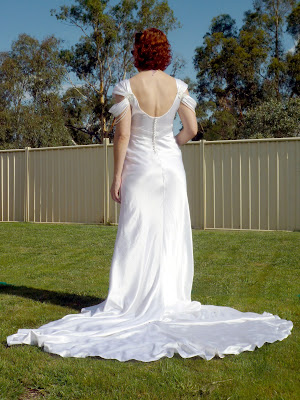 Behold the beauty that is my crazy, long train.
The hem took a good seven hours to sew!
For some reason, the elasticised continuous loop trim is difficult to source these days so I had to make my own button loops. There should have been twenty buttons down the back of the dress, but I had terrible trouble getting them in quantity. After much trial & error with nail polish and various types of buttons, I just had to go with less buttons - I was only able to find fifteen. 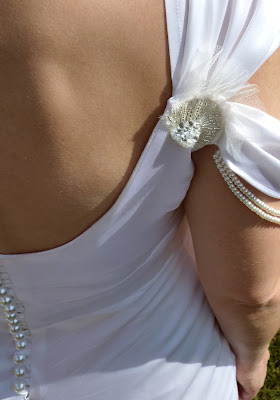 Despite the fitting issues, not to mention the bruised elbows caused by hours of hand sewing, my perfect wedding dress was well worth the effort.
- Tamara﻿
Posted by Tamara at 23:26