More caplets than a Super-Heroine

I've been in the midst of market mania here this week and have had little time for anything else but sewing. There has been a mild state of panic but things are coming together nicely. D-day is now only two days away...
While rummaging through my UFO pile for quick fixes to sell, I came across some caplets in various stages of completion. How many caplets does one girl need? My thinking at one point appears to have been three. Now I'm a firm believer of having choice when it comes to coats, but capes of any kind are a different matter entirely.

Some other successful unearthings from the UFO pile are: 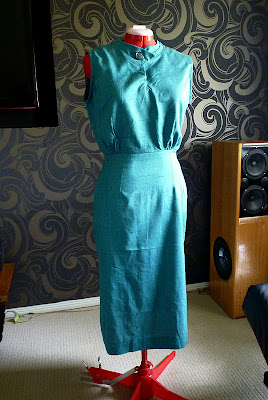 A late 50s sheath dress silk taffeta (?) which I purchased in pieces a year or two ago. Thankfully the previous owner left the neckline detail, waistline gathers and kick-pleats in tact or this would have been a nightmare to reconstruct. Basically, I just followed the existing folds and left over stitching for the darts, then attached the bodice to the skirt. Voila! 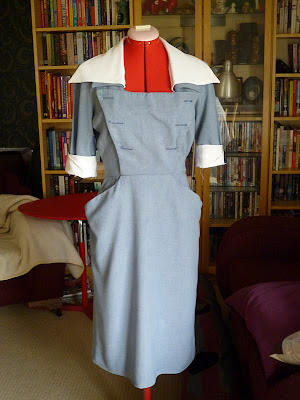 This awesome 40s nurses uniform arrived into my care a dirty grey colour with off-white cuffs & collar, and from there I proceed to ruin it. As the story goes, I decided to soak it in some colour-safe bleach but didn't take into account that most vintage buttons are not colour safe and should be removed before washing. What a mess they made! The off-white became a grotty looking, patchy blue and the grey suffered a similar fate.
The cuffs & collar were removed, then restored using this incredibly toxic, yet extremely effective bleaching powder and now they look better than ever! The dress itself has been dyed 'ocean blue' and is a 100% improvement on the grey. Just the buttons to go... 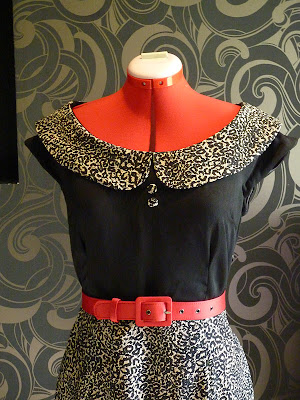 Lastly, the Jungle Fever dress is now complete and while it's not something I would wear,
it totally rocks!!
The North Melbourne Market ﻿ will be held on 13th November at
the Lithuanian Club, 44 Errol St, North Melbourne.
See you there!!
- Tamara
Posted by Tamara at 03:32