Down for the count

This time last week I was arriving home from an awesome night of swing dancing, only to have it followed up by two days of feeling like I'd been hit by a truck, and culminating in a trip to the hospital emergency dept on Wednesday morning.
You see, I am an asthmatic and when I get a cold it can quickly turn into a chest infection. Ordinarily I'm a bit of a bloke about illness - she'll be right, I'll go to the doctor when I'm really sick - but it takes forever to get an appointment to see a doctor and I really didn't think I couldn't wait a few days. Breathing is a bit of a necessity. Mdblm came home from night shift and it was off to the hospital for me. Never fear, I was admitted immediately and now that I have some drugs I'm on the mend - be it very slowly.
But that's enough of that unpleasantness. It's been a week but I really wanted to share the details of my swing dancing frenzy. It's been a very long time since I've ventured out dancing on this grand a scale and I didn't realise just how much I've missed it.
From November 24th - 27th, Melbourne played host to the 11th Annual Melbourne Lindy Exchange (MLX) - four nights of swing dancing featuring live bands and DJs 'til the wee small hours, and social activities during the day for those who are up to it. It really has been a long time since I've attended anything like this so I decided to take it easy and only do two of the four nights on offer.
Friday night's dance was held at the Fitzroy Town Hall and, as you can see from the pic above, the dance floor was all smooth and shiny... It was divine! There was a large crowd and it was great to see so many old, familiar faces. I even got the chance to blow the dust off some my favourite moves. 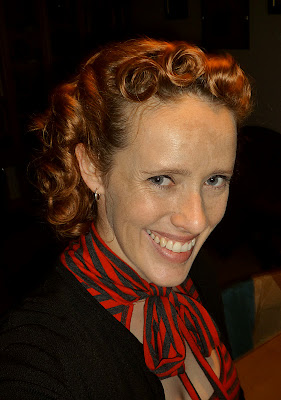 I was also having a particularly good hair night too. Can you believe this do stood up to nearly 3 hours of jumping around in sweaty, humid conditions?  All achieved with some setting lotion and rollers, and some inspiration from Lauren Rennell's 'Vintage Hairstyling' book. 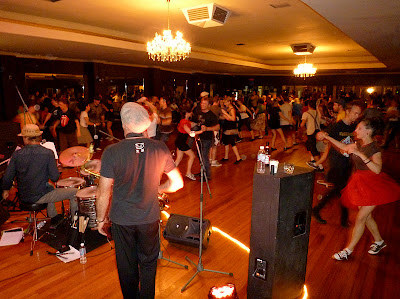 Sunday night was a less formal affair but still featured a live band at both the main event and the after-party. Surprisingly there was still a substantial crowd left standing, even after the Swing Mafia Pub Crawl, although many of them had passed out on couches well before midnight.

The music got quite funky in the early hours and I even got the chance to bust some 'hip hop' swing moves with an old friend. He's loads of fun and his dance-card is always full. I was exhausted but was having way too much fun to leave and pushed myself that little bit too far.

While I had an awesome weekend of activity, I have since been confined to bed with this god-awful cold. See where exercise will get you! As I said earlier, the drugs are doing their stuff so I'm hoping to be back in the next couple of days.