The weather this weekend was not great for touring, but by Sunday I really needed to get out of the house. I had seen an 'open house' advertised and being a free event, it was a great idea for a budget-conscious outing. 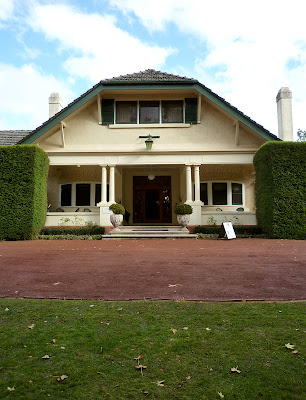 Campaspe House, was built by Alexander Goldie and his wife Caroline in 1927. The English style, solid brick residence is nestled among bushland on the outskirts of Woodend and features five acres of Edna Walling designed gardens. The house itself has some lovely Art Deco details; a lead light panelled double front door, loads of perfectly preserved wood panelling, and a terrazzo tiled bathroom.

The Goldie family lived in the house until 1942, when their son, Sgt. John Hunter Goldie, died in a training accident in Scotland. The property was purchased by a company in 1984 and has been used as a conference centre and hotel since. There is now a licensed restaurant and the house and grounds are also available for weddings.

The house and gardens are really lovely, but there was one thing which excited me more than anything else...

I've never spied one of these mushrooms in real life,
I think I may actually have clapped my hands in delight.