I meant to do this post a couple of weeks ago but it completely slipped my mind.
So, with a departure from the usual, let's start the week off with a little music. 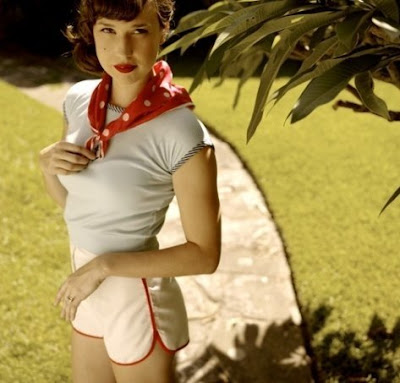 I saw this photo and it was an instant girl crush. This cutie patootie hails from Sydney and has been writing songs for as long as she can remember. She started seriously  playing the guitar before she hit her teens, learning the basics from her dad and brother,  before venturing down her own path. Lanie's style has been described as swamp blues, country, roots, rockbilly, and even pop (huh?), but it's her smoky vocals and dirty, blues guitar that got my attention.

At the beginning of 2011, Lanie won a slot on the Sydney Big Day Out line-up, thanks to Triple J’s Unearthed competition and hasn't looked back since. Her debut album, To The Horses, was recorded and mixed in a total of four days at a studio in Sydney, with all four musicians playing in the same room. Lanie likes to record this way because she feels it helps to maintain the rawness of the sound and the band doesn't lose energy doing endless retakes.

Miss Lane writes in the same way she chooses to record, quickly, and manages to find inspiration in all manner of places - 'Betty Baby' is about her battered old guitar. There is a great story about her song '(Oh Well) That's What You Get for Falling in Love with a Cowboy', as told by the lady herself at her live show:

Our songstress awoke one morning and her man said to her: "You said the strangest thing in your sleep last night." As she rubbed the sleep from her eyes, she responded with a smile "Yeah, what did I say?" "You said: Oh well, that's what you get for falling in love with a cowboy." Lanie had no idea what she'd been dreaming about but a seed had been planted. Lanie's man left the apartment to forrage for food and when he returned the song was finished! He was gone less than an hour. 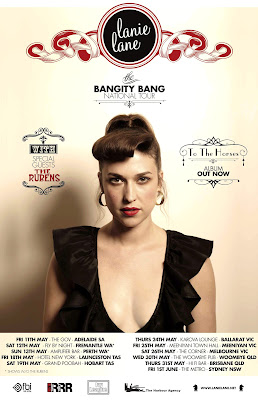 I was lucky enough to secure two tickets for the second of her three sold out shows in Melbourne last month and seeing her live has just made me love her all the more. She's softly spoken and genuinely appreciative of the audience, but for me her most charming trait is that she's a dork. It appears she had an ongoing bet with friends and her dare for the evening was to make a noise like a Wookie. I'm afraid to say she wasn't very good, but she still threw back her head and gave it a red-hot go. How could you not love her?!

Lanie Lane is now touring regional Australia with her solo show 'On My Own Track'.
Visit Lanie's website for more LL love!

Email ThisBlogThis!Share to TwitterShare to FacebookShare to Pinterest
Labels: Music