I know this post is a day late but yesterday's Bastille Day baking turned out to be more of a challenge than expected.
First up, Bastille Day: France's national holiday on July 14, is seen as the symbol of the end of the French monarchy and the beginning of the First Republic. It was on this date in 1789 the French stormed the Bastille Prison in Paris, triggering the French Revolution that toppled King Louis XVI and the aristocracy. As a historical symbol of revolt against injustice, Bastille Day is commemorated world-wide.
As my own personal tribute to France's national day, I decided to make some delicious little cakes called Madeleines. These bite-sized lovelies are so light and fluffy, you just can't stop at one. Unable to locate my usual recipe, I turned to my 'go to' recipe book for French cuisine "A Little Taste of France" by Murdoch Books.
﻿ 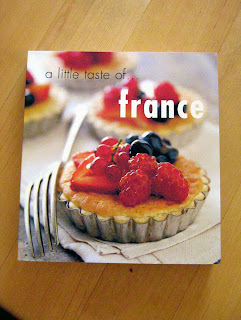 Everything I've made from this book has been a success and I was confident there wouldn't be any problems. Not so I'm afraid. The eggs and sugar need to be whisked until they're light and airy, just off forming peaks, but this recipe is quite vague in its explanation. My arm also got tired fairly quickly so I stopped well short of the desired consistency. Qu'elle horreur!! The first batch turned out like little rocks. I tried adding a splash of milk to the second batch to thin the batter and while they looked a lot better, they still tasted ordinary.
﻿Refusing to give up on satisfying my Madeleine craving, I found my original recipe and started again. This time however, I got smart. One of my cooking implements has a whisk attachment, which for some strange reason I've never used, so I put it to work. It's fantastic! No more hand whisking for me! The batter was a lot lighter, in both colour and texture, and the finished result was just reward for sticking at it. Ta-da!!
Posted by Tamara at 14:41

Email ThisBlogThis!Share to TwitterShare to FacebookShare to Pinterest
Labels: Cooking