A Tribute to the Spitfire Women - Part 1

Early this year I was made aware of an incredible group of women who flew military aircraft during WWII, by way of a BBC documentary film called 'Spitfire Women'. I had no inkling these women even existed so please feel free to come back tomorrow if you already know their story. 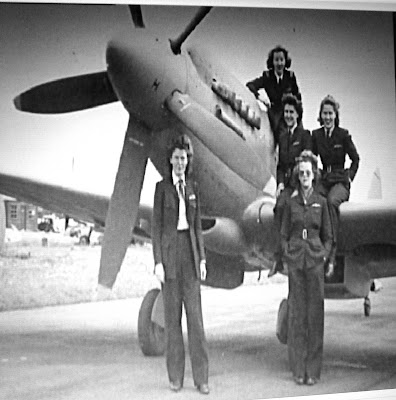 The Air Transport Auxiliary (ATA) was made up of over 1000 pilots, delivering nearly 300,000 aircraft from factory to RAF frontline bases in Britain from 1940 – 1945. Pilots had to be capable of flying a full range of aircraft - 147 different types - from Tiger Moth trainers, through frontline Spitfires and Hurricanes to heavy bombers such as the Lancaster. As expected, men made up the majority of the ranks but as the war progressed women were to play a greater role.
Pauline Gower was the first female allowed to climb into an RAF plane, let alone fly one. The daughter of a Tory MP, Gower was given her first plane at the age of 21 and using it to give joyrides at Flying Circus’ during the 1930s. As war approached, she had amassed over 2,000 hours flying time and had flown 33,000 passengers without incident, yet she was not allowed to fly in combat.
Being a well connected woman, she used her influence to persuade the male establishment that women should be allowed to boost the dwindling numbers of pilots, by ferrying planes alongside the all male Air Transport Auxiliary. Gower was appointed head of the Women’s branch and would continue to champion the cause of equality for women pilots until her death in 1947.
In 1938, eighteen year old socialite Diana Barnato Walker was seeking a break from the life of a young debutante when she paid £3 for a flying lesson in a Tiger Moth biplane at the Brooklands Motor Racing Circuit. She was flying solo after only six hours’ training and three years later, she abandoned her affluent lifestyle to join the ATA.
At the end of a hard day’s work, when Diana had done her job as professionally as she could, she would speed off to London - every single night! She was known as a high spirited party girl, often out to the wee hours at the Embassy or 400 Club in London, but she would return to base on the milk train to be in the air by 9am. ﻿
﻿

Despite being at the end of her shift, pilot Maureen Dunlop looked casually glamorous when she appeared on the cover of Picture Post magazine in September 1944. At the time Maureen had just landed her aircraft and found herself the attention of waiting photographers. When asked if she would mind posing, she responded: “I’m busy. I want to put this away.” And, as she brushed her hair from her face... SNAP!! The media had their pinup girl.
__________________________________________________
If you're interested in learning more about the men & women of the ATA, the Maidenhead Heritage Centre opened the first ATA Exibition & Archive in August 2011 and it houses one of the largest collections of ATA memoriblia and records in the world.
-Tamara
*Note: All images in this post are screengrabs from the BBC documentary 'Spitfire Women', please check copyright ownership before using.
Posted by Tamara at 00:06