This Sunday was Mdblm's birthday and in honour of all those M's, we went to see The Muppets - we were both fans as kids - and then Mexican for dinner. Being a special birthday evening, I wanted to look my best for my man so I took the opportunity to wear my adorable new dress.
Hollywood 1606 is yet another of my patterns which has been patiently awaiting its time in the sun. I found the perfect fabric a couple of months later - a stretch cotton with an awesome fan print - but I've just never had the desire to put them together. Until now... 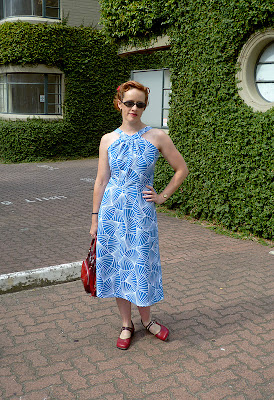 I had originally planned to wear this dress to the Kustom Nationals in January but the weather was lousy so I held off finishing it. I was really glad I did because I was having some fitting issues with the bodice and ended up having to add a couple of bustline darts to get it to sit properly. 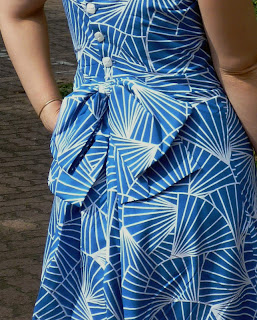 And just look how cute the bow at the back is! I was a little worried it was going to be too big but I'm really happy with how it looks. In the end, I added some lining to give the bow little more weight and it's cut on the bias so it falls beautifully. 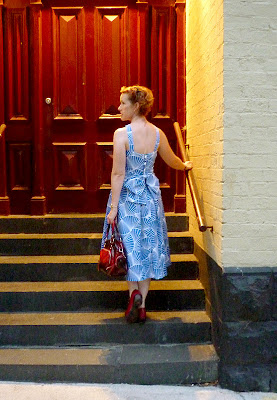 The inverted pleat at the back is only attached at the waistband which gives it a bit more room in the skirt and makes it super comfy to wear. I really love this dress and I'm now thinking I might need to make a little bolero to match.
-Tamara
Posted by Tamara at 23:11