All Dressed Up & Nowhere To Go

Happy New Year everyone!!
First up, I'd like to apologise for going MIA for the last few weeks. It was our turn to host Christmas this year - there were ten of us in total - and while Mdblm has done it before, I was a hosting virgin. The plan was to keep things simple; it was going to be a warm day so I did three different salads and Mdblm BBQ ed the meats. For dessert, there was the traditional plum pudding (ick!), delicious little lemon tarts and a fresh fruit platter. The Mothers found it difficult to stay out of the kitchen but I had things well in hand and the day went without a hitch. Phew!
Our New Years Eve plans were very simple too. A local restaurant was holding an 'Al Capone' party and we thought it would be a better option than staying home. It was also the perfect opportunity to make something spectacular to wear. 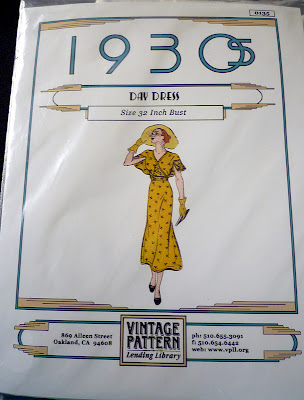 I bought this pattern from the Vintage Pattern Lending Library a few years ago but have never really been inspired to make it, until now. The only real problem was that it was a day dress and I wanted a fancy evening dress. 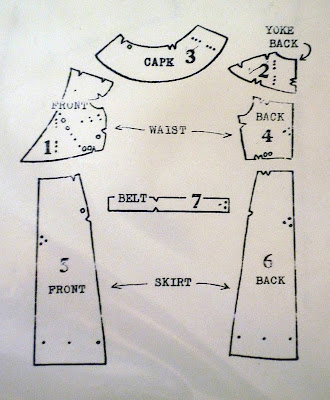 After studying the pattern pieces, I couldn't see any reason why the dress couldn't be made backless under the attached cape. I would still need something to support the skirt so I cut two triangular pieces using the existing back piece. Due to the limited amount of material at my disposal, I decided to make a muslin to see if it would work. Can you believe it?! I almost never do that!
I was pleased with the result so I pressed on ahead with some printed stretch satin from my stash. I'd also decided to line the cape with some green matte satin to give it a bit more flash when I moved. Oh, and I also got smart with the bias binding and top stitching - it's so much easier to sew it all while the bodice is still flat. 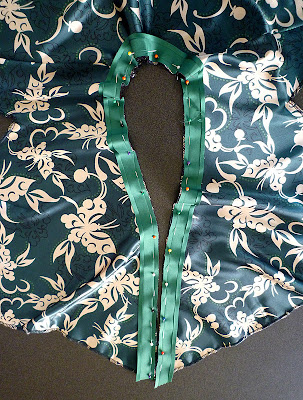 Construction of this dress was insanely easy and it was finished with three days to spare - plenty of time to work on Mdblm's party pants. Sadly, it was all for nought. Late on Friday afternoon I received a phone call from the restaurant, they had decided to cancel the party. What?! Apparently there was very little interest and it was going to be more cost effective call things off. Talk about leaving us in the lurch!
Now I have a gorgeous 1930s evening dress and nowhere to wear it. 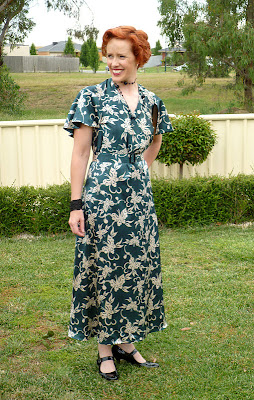 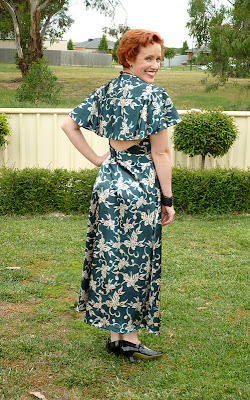 New Year's Eve wasn't a total wash though, Plan B was Japanese and it was delicious! 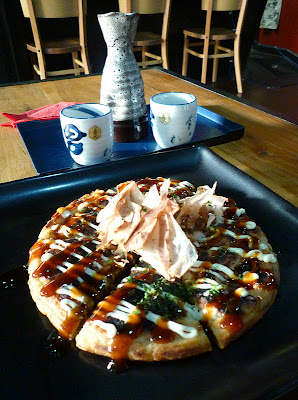