I did some more garage sale-ing this weekend, this time it was a deceased estate in Northcote and it was well worth the fourty minute drive.
The dear departed was a woman of extremely good taste with lots of high quality linen clothing up for sale. She also appeared to be a bit of a sewer too, there was a decent collection of Vogue patterns but they were from the early 1980s so I left them. I did however end up going home with a few pieces of velvet, some books, a box of buttons, and a good selection of vintage hats - two of which are hand-made.
﻿
From Northcote I rushed to my favourite 'yeast free' bakery, Loafer Bread in North Fitzroy to stock up on real sourdough bread before heading home to prepare for an evening at the symphony...
The Melbourne Symphony Orchestra free concert series is another summer tradition I've been trying to keep alive since moving from the inner city. Each year, the MSO play four free concerts at the Sidney Myer Music Bowl and is a great opportunity for the uninitiated (like myself) to experience classical music - not to mention a good excuse for a picnic.
This Saturday's concert was called Kulkadungu and is also the name of the featured a piece written for the didjeridu - not my cup of tea but it was something different. The first piece, El Salon Mexico, also fell a bit flat and I was ready to head home at intermission. Thankfully, the third piece 'Sibelius Symphony No. 2' was a bit more traditional and had lots of soaring violins and chellos. As the sun went down, the crowd relaxed into the music and the atmosphere became magical. 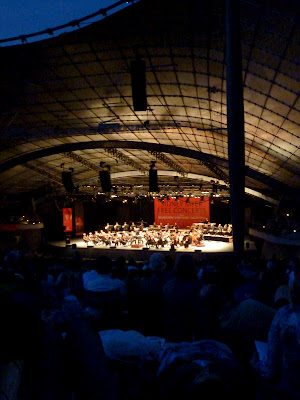 Sadly, there is only one concert left for the season - Saturday 25th February - and is billed as 'a celebration of Latin American music'., which sounds promising. The weather is also looking good so if you plan to go, make sure you get there early, it's bound to be popular.  Gates open 4pm, concert starts at 7pm.
- Tamara
Posted by Tamara at 23:40

Email ThisBlogThis!Share to TwitterShare to FacebookShare to Pinterest
Labels: Market Finds, Out + About