The Hats Have It

This weekend saw the 150th Anniversary of the Kilmore Racing Club being celebrated with the running of the Kilmore Heritage Turf Cup. With Mdblm off exploring 27kms of rusty crap at the Ballarat Swap Meet (boy stuff), I was at a loose end so I took the opportunity to get dressed up and get out of the house.
Entry was free to those dressing in period costume - 1860 to 1950s era - and it gave me a real buzz to be able to choose from something straight from my wardrobe. The weather has been insanely hot so the obvious choice was my recently completed 1940s Blue Fans dress. On a whim, I entered the Heritage section of Fashions on the Field but I had no luck. I think my lack of a hat went against me.
Speaking of hats, check out some of these amazing creations!
The top prize winners of the Modern section were both representing miliners and their dresses were custom-made to match the hats. Their win was well deserved.
This woman's hat was a personal favourite and the ruffled neckline was an unusual detail. 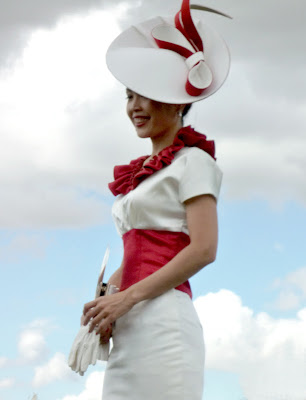 Not to mention her sky-high heels...
And those things on the heels are called 'Starlettos' - a nifty little invention to stop your heels sinking into the turf. I'd never seen these things before and to be honest I thought she had stepped on a lolly!There are more subtle ones available.
All in all, it was a nice day out and next time I'll be sure to wear a hat!
﻿
- Tamara
﻿
﻿
Posted by Tamara at 23:43