The Bendigo Easter Festival (Fair) has been in existence since 1870, and is the oldest community festival in Australia that occurs at Easter each year. It includes the Chinese Spring Festival, carnival rides & attractions, a Torchlight Procession, and the Easter Gala Parade which sees Sun Loong, the longest imperial dragon in the world, dance through the streets.

We had planned to head to the Festival but the weather here has been fickle to say the least. Plus, Mdblm & I are both busy with other projects so we decided our time would be better spent at home. I've been very productive in the sewing dept and I hope to be able to show off some of my creations later in the week.

Anyhoo, with no outing this weekend I've had to delve into my image archive and it just so happens that I have couple of lovely pics from the Easter Fair from the early 1950s. Unfortunately, I can't locate the caption at this point in time, so all I can tell you is it was taken at the Chinese Spring Festival. 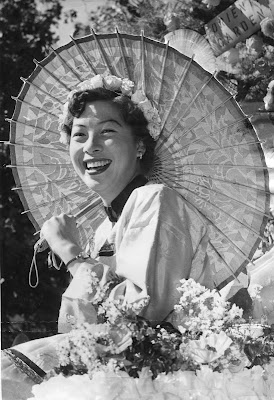