Cocktails in the Forbidden Temple

It seems like forever since I've had a night out, so when I received an invitation from a friend to go see a band on Saturday night, I didn't have to think twice about saying yes. The band was on at 8.30pm - early, for a change - so we decided to head off early and grab a bite to eat beforehand.

Dining out options in the far outer suburbs are fairly limited, so we always take the opportunity to eat decent Asian food when we travel in to the city. I booked a table at a Malaysian restaurant in Brunswick St, knowing they tend to be fairly speedy with their service, just in case we had to eat and run.  It seems they've adopted a more relaxed approach since my last visit; thankfully the food is still excellent 'cause we pretty much missed the band's entire set!.

I wasn't too disappointed though, our next stop was a bar I'd been keen to check out for a while - The LuWow.

The LuWow is a fairly new Tiki/Exotica/Island themed bar in Johnson St, Fitzroy. The decor really has to be seen to be believed and upon entering you feel like you've stepped into a wonderful, fantasy land! The atmosphere is fantastic; management seem to cap patronage to avoid over-crowding and they have a lock-out policy after midnight. I have to say, it certainly made for a much nicer environment. 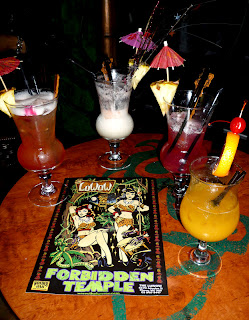 There are two different rooms at The LuWow:

The Island Village offers shady booths in individual huts, exotic sounds, table service and the relaxed tempo of a South Seas holiday. It also feature a traditional Polynesian bar and there are even tikis available for purchase.

The Forbidden Temple is described as: 'a feast of exotica with claws! Lost in a dark steamy jungle, ablaze with precious jewels and terrible idols a ruined pagan palace beats to the sound of Bongos and lost vinyl rhapsodies.' Tropical rum cocktails abound and fringe-clad 'Go-Go Goddesses' flank the stage. Shake it girls, shake it!!

The Ladies and I danced away a few cobwebs to the obscure 50s tunes busted out by the DJ, while the boys talked car-building projects and minded our seats. They're so good like that. A fun night was had by all and Mdblm and I fell into bed 'round 3am! That's a fair effort for us oldies.

Ladies, we really must do this more often.
Here's cheers!