Melbourne Open House began in 2008, with eight buildings open to the public and over 30,000 visitors across the day. This weekend saw MOH, now in its fifth year, open one hundred spaces including commercial, residential and green buildings, as well as places of worship and sporting grounds.

After a marathon effort last year, there were only a few buildings on this year's list I was interested in visiting. It was not good weather for being out on foot - the winds here are unbelievably icy at the moment, thank the Gods for my trusty earmuffs! - and luckily, there were very few queues.

The first building I wanted to see was the Royal Historical Society of Victoria. This fairly unassuming looking building has always caught my eye and it was nice to finally see what's inside. Completed in 1939, the building originally used by Australian Army Medical Corps Drill Hall, and still retains much of its original Art Deco features.

They're currently showing an exhibition entitled 'Melbourne Theatres in Transition' which features photographs, programs and other memorabilia from the 1840s - 1940s. It was surprisingly interesting. Melbourne had an impressive number of theatres over the hundred year period.

Burt & Pete's Barber Shop wasn't on the list of MOH buildings, but we couldn't help dropping in when Peter himself motioned to us through the window. This tiny little shop in Little Lonsdale St has been a barber shop for many years and is so wonderfully old skool. The shop is normally closed on weekends but Pete was happy to come to work after a desperate phone call from a regular customer. Now that's customer service!

Being easily distracted as I am, I spied this shabby looking warehouse building down a small side street off Flinders St. and had to investigate. As you can see, some of the mouldings are damaged, but it's currently up for lease if anyone fancies giving it a bit of TLC. 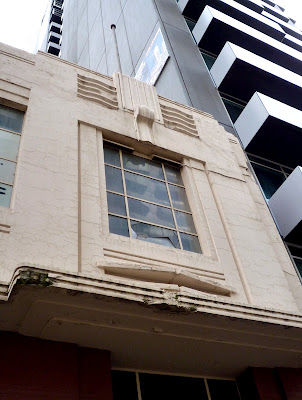 Alkira House was built in 1937 and was originally used as an office building. Pretty swish, huh? Can you imagine how amazing it must have looked in its heyday? Today it is the home of twelve boutique serviced and self-contained apartments which have recently been refurbished.

The Rendezvous Grand Hotel is another building I have admired from afar, and although I would have liked to have seen more than the downstairs bar and foyer, I wasn't prepared to wait in the queue for a tour. Time was running out and there were other things to see. No matter, the terrazzo tiled floor of the Grand Vestibule and Art Nouveau gum leaf detail on the ceiling were enough to keep me happy. 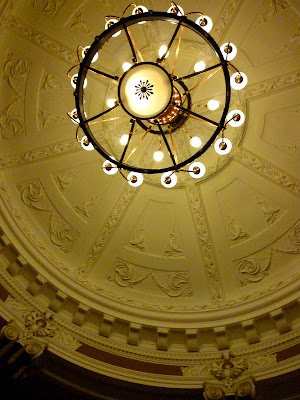