As I mentioned on Monday, I've completed a few sewing projects in the last couple of weeks and today I want to talk about the multi-era skirt. It was something which was supposed to be quick and simple but turned into a bit of a saga.

A couple of weeks ago, while fossicking in Spotlight for some black tracksuit material, I came across a lost and lonely piece of black stretch drill. It was roughly 90cm (150w) and being a random piece of fabric, they sold it to me as a remnant - only $4.50! Little black skirt here we come...

Somewhat foolishly, I chose the skirt from this 1930s suit pattern I have in my collection. I think it was because I've some fabric in my stash to make the jacket and a black skirt would complete the outfit.

So keen was I to get  started, I didn't notice my stretch drill wasn't on the suggested fabrics list. You can see where this is going, can't you? The suggested fabrics are wool crepe, velvet, etc, basically all floppy materials; the stretch drill has the drape of a piece of cardboard. Needless to say my skirt looked ridiculous! It stuck out like a giant A-frame and was nowhere near the nice, general purpose skirt I had pictured. It was time for a re-think...


Once unpicked, I would still have enough fabric to re-cut my 30s disaster into the something more suited to the fabric. By all appearances, this late 40s Louise Scott Creation would do the job nicely. The only major change I would need to make is the addition of a back seam - the 30s skirt has two panels in back and this one should be cut on the fold. No problem, easy peasy!


That said, there was something else I was going to have to work around... 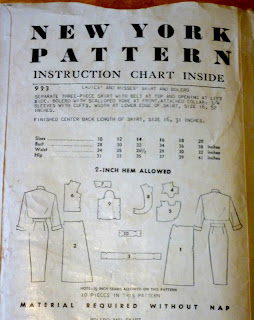 Take a look at the shape of the skirt pieces; there is no way those sloped side seams﻿ will create a tapered skirt when sewn together! No way in the world. If you think about it, it will create the opposite effect - yet another stiff A-frame! Having encountered this problem before, I pulled out my trusty Route 66 pencil skirt and basically traced the shape of the tapering onto the inside of my skirt using chalk. Once again, not very accurate but boy does it ever work. 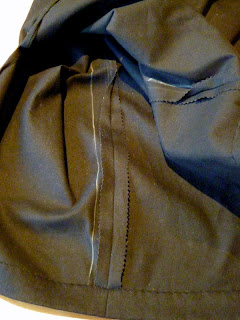 You can see from the photo that I didn't quite taper it the as much as the Route 66 skirt, I needed to allow room for the lining. In the end, I think cut a good three inches off the side seam at the hem. That would be those stupid pointy end pieces of the original pattern.

So, several patterns and a dash of freestyle sewing later, I've managed to turn this incredibly trying project into the multi-purpose skirt I set out to make. Phew! 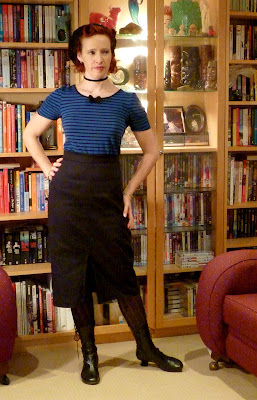 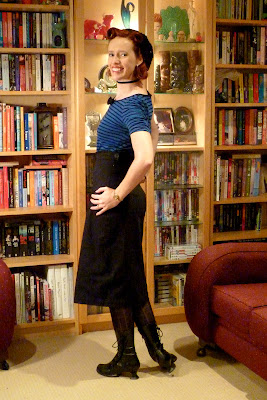 BTW - How cute is my t-shirt? I picked it up at Target a couple of weeks ago for $10 and remodelled it to suit. Originally, it had a deep scoop neckline, way too low for me, and the adorable little bow was attached to a useless pocket. I carefully unpicked the pocket and removed the bow for later use. The shoulder seams were then unpicked and roughly half an inch was taken out of the front to create a higher neckline. Woohoo! Another dodgy experiment pays off! 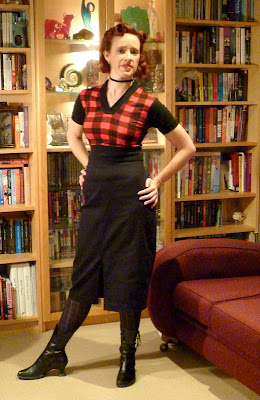 The addition of this skirt to my wardrobe also means I finally have something to wear with my Freddies of Pinewood top. Yay!!