This weekend was the 5th Annual Camperdown Cruise Rockabilly Weekend. This was our second trip to 'The Cruise' and I have to say it has well and truly exploded. It originally started with 15 cars and a BBQ; now, in 2011, there were an estimated 700 show cars, 1800 dancers, 16 bands and trade stalls too numerous to mention.
The highlight for me was meeting the girls from 'Some Fancy Ladies' who were launching their 2012 Gil Elvgren inspired pinup calendar. They also had a 'peep show' featuring the gorgeous Foxtrot India. There were no pics allowed during the performance but here's one of the stage setup. It was a very small room so people were a little unsure how to react but I hear tell they've been given a spot on the stage in the theatre for next year. Go girls!! 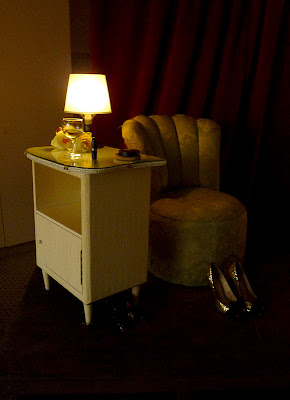 Kustom Lane Gallery were lucky enough to have their own street - or should I say lane - in which they had a collection of Lowbrow, Tiki and Pinstriping art for sale. And there was also a guy doing a pinstriping display. Talk about a steady hand! 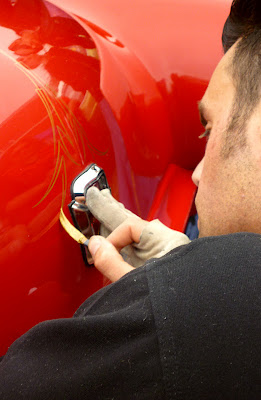 This could quite possibly be the coolest scooter I've ever seen!
Not to mention its matching caravan & car... 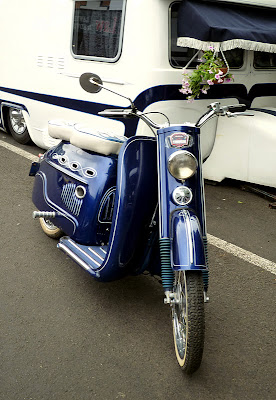 An adorable Rockabilly couple who were kind enough to allow me to photograph them while they were eating lunch. A big thank you! 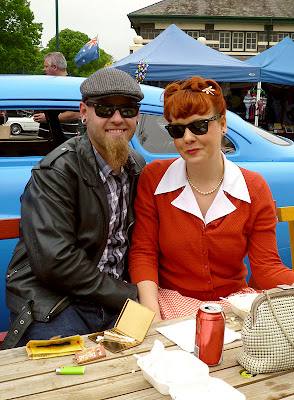 With so many cars in attendance it was hard to pick a favourite, but this beautiful green machine caught my eye... 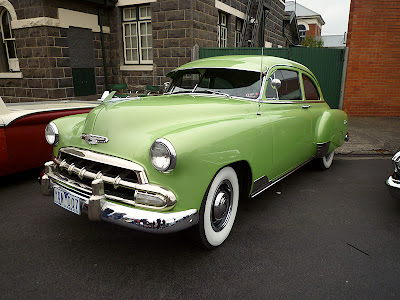 Congratulations to the organisers for yet another successful weekend and here's to an even bigger and better event next year.
- Tamara﻿
Posted by Tamara at 23:03

Email ThisBlogThis!Share to TwitterShare to FacebookShare to Pinterest
Labels: Burlesque, Kustom culture, Out + About